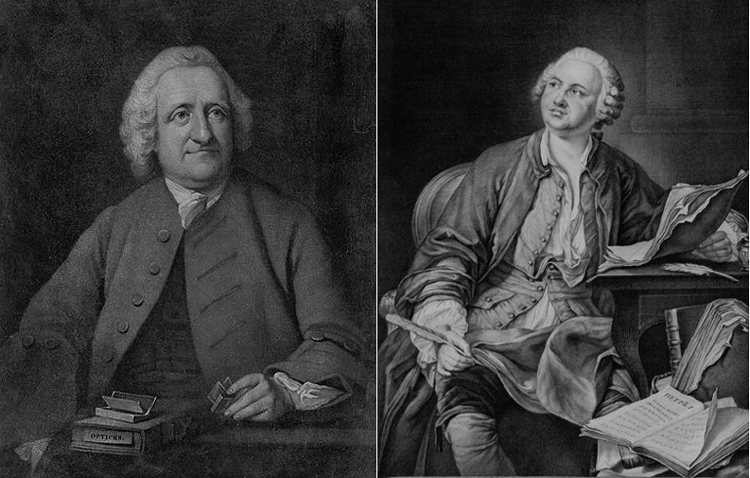 What is common between John Dollond (1706-1761) and Mikhail Lomonosov (1711-1765), why are their portraits are placed here side-by-side? The former is English optician, the latter is Russian polymath, they were born at the beginning of the 18th century, and both died just few years after making their major achievements: John Dollond had invented the achromatic telescope, and Mikhail Lomonosov had discovered the atmosphere of Venus. Let‘s see whether we can find more connection between those two great men.

The invention of the telescope early in the 17-th century has dramatically changed our understanding of the solar system and the universe, but the telescope itself did not change much for a while. Even 150 year later, the telescopes had the same type of the objective – a single lens. The changes over that time were mostly related to the quality of the optics, the size of the aperture which modestly increased by 10-15 times, the length of the instruments changed a lot from 1 foot hand-held telescopes to 210 foot long ones (C. Huygens) and longer. Increase of the length was a necessary step to overcome the main problem of the refractive optics – chromatic aberration. The eyepiece had been changing as well: from a single lens of the Galilean or Keplerian type to a 3-lens Schyrlean (1745) or 4-5 lenses eyepieces for terrestrial observations. In 1662 C. Huygens invented a new two-lens eyepiece for astronomical observations.

The year of 1758 has brought to the market a new two-lens objective telescope from the optical shop of John Dollond & Son in London. A combination of flint and crown glasses had greatly reduced the chromatic aberrations and that was a breakthrough in the refractive optics since the Lepperhey’s invention of the Galilean telescope! The Royal Society had appreciated Dollond’s work by awarding him the Copley Medal of in 1758. The invention of the two-lens achromat principle was not only theoretical, but very practical, as the astronomers got a new type of relatively compact powerful refractors.

This new instrument changed the classification of telescopes. They now were divided to terrestrial and astronomical ones, reflectors and refractors and the latter ones were classified by the number of lenses in the objective: single-lens (singlet) and double-lens (doublet) achromatic. A three-lens (triplet) objective was added to the classification by Peter Dollond in 1763 as a further step in improving the refractors by reducing spherical aberrations. That was not as big of a step, as the first one, it was more of a technical solution: by dividing the optical power of the crown lens in two parts and making two crown lenses instead of one, the spherical aberration which is proportional to the square of the lenses curvature has been significantly reduced… Going further in this direction is an interesting subject by itself, but the main purpose of this article is different – namely, identification of the telescope that was used to discover the atmosphere of Venus.

As it was written in our previous article (Early gears for seeing Venus atmosphere) we have quite limited information about the instrument used by Lomonosov for observations of the 1761 transit of Venus. Let’s go into the available details. The best source of any historical research should be original articles and documents, and I will be using scanned pictures from the Lomonosov’s original article published in July 1761 “The appearance of Venus on the Sun, observed at the St. Petersburg Imperial Academy of Sciences on May 26, 1761”. For those, who cannot read Russian, I would recommend the most detailed modern English translation by V. Shiltsev [1]
The article contains a plate with several drawings of the event, and the two upper ones Fig.1 and Fig.2 are the most important for identifying the Lomonosov’s telescope.

Fig.1 shows the ABC sketch of the Sun. The beginning of the Venus transit (ingress) is at the point B on the right, and the end of transit is in the point A on the left. As we see the trajectory of the Venus goes through the upper half of the Sun’s disc from right to left. Comparing this sketch to the actual path shown on the image below gives as the first key info: Lomonosov used the astronomical telescope that gives an inverted image. From the text of his article we know that he used a 4.5-feet long two-lens refractor, while Krasilnikov – the other observer of the St.Petersburg team – observed the event with a 6-feet two-lens refractor. Both of these two-lens design telescopes can only be of one type – the recently invented (1758) Dollond’s achromatic refractor. It took a bit of time for a new expression “achromatic” to become a commonly used term. In the very beginning, the difference between the new refractors and the old ones was the existing of the second lens (“glass”) in the objective. Therefore, we have now concluded that Lomonosov’s was a 4.5 foot doublet astronomical telescope.

The only type of the eyepieces available for the astronomical telescopes of that time was the Huygenian eyepiece with a typical field of view (FOV) of 20 – 25 degrees.

Fig. 2 from the Lomonosov’s article shows the image of the Sun with Venus on it as it would be seen between the second and third contacts. Lomonosov described the off-axis performance of his telescope in details:
“…it was clearly noticed that as soon as Venus moved off the axis of the tube and approached the proximity of the edges of field of view, a fringe of colors would appear due to the light rays refraction, and its [Venus] edges seemed smeared the farther [it] was from the [tube] axis X (fig. 2).”

We have no possibility to test the original Lomonosov’s telescope as it did not survive the World War II. What we can do is to create a model based on actual data of the early Dollond Flint-forward telescope made in 1758-1760 [2], and see whether Lomonosov’s description of the off–axis performance of his telescope is similar to such modern model.

The spot diagram of the telescope objective is shown on the right and for the eyepiece – on the left. The images are given for linear off-axis shifts from 0 to over 6mm, that corresponds to field angles from 0 to 0.3degrees for the objective, and from 0 to 10 degrees for the eyepiece (half field of view).
The box size is 200 micron for objective diagram; and 100 micron for eyepiece. Circles correspond to the Airy disc. As we can see, both objective and eyepiece have almost diffraction limited performance near the center of FOV, while the off-axis performance of eyepiece is affected by aberrations.

The next diagrams show:
The combined performance of the telescope and human eye (on the left) and Zemax generated image of an artificial star as it would be seen near the edge of view (on the right). And again, the telescope-eye system spot size is approximately equal to the size of the Airy disc near the center of the FOV where we have quite decent image quality.

The monochromatic images near the edge are affected mainly by coma and to a lesser extent by spherical aberration and astigmatism. The lateral chromatism extends the monochromatic images of different wavelength across the axis and produces an image of colored strip of few arc seconds long – which is similar to Lomonosov’s description of the off-axis performance of his telescope. The only difference is that the modeled image is for an artificial star, while Lomonosov observed black disc of Venus over bright background of the Sun. In his case the image of the Venus (when planet is near the edge of FOV) did extended in the radial direction from the point X (Fig. 2), and the edges of Venus were also colored radially with the outer edge being more colored and deformed. The shape of the Venus disk when being near the edge will be radially extended – and that what we see on the Lomonosov’s sketch Fig. 2.

Therefore, we can assume that the computer model of the early telescope is close to the telescope used by Lomonosov.

The solution of above mentioned problems is simple and given by Lomonosov in the same article:
“Therefore, during the entire observation the tube was permanently directed in such a way that Venus was always in its center, where its [Venus’] edges appeared crispy clear without any colors.”

Lomonosov’s Fig.2 tells us that Venus was near the edge of the FOV of the eyepiece, therefore one can conclude that that the FOV was approximately equal or slightly larger than the angular size of the Sun, i.e., about half a degree.

The direct evidence of the origin of telescope can be found in the digest of articles on the 100th anniversary of Pulkovo Observatory (prepared in 1939, printed in 1945, right after the end of the WWII). The last article of that book by A. Nemiro “Museum Astronomical Observatory at Pulkovo” quotes:

”…the most numerous group of tools are the instruments ordered to observe the transit of Venus across the solar disk in 1761 and 1769. This group includes achromatic telescopes by Dollond, the reflectors by Short of the Gregorian design with lens-heliometers, and quadrants by Sisson. One of these Dollond refractors was used by famous Lomonosov to make the biggest discovery – he discovered the existence of an atmosphere of Venus during its passage through the disk of the Sun in 1761”.

Knowing that a typical FOV of the eyepiece is at most 20-25 degrees, we can calculate that the Lomonosov’s telescope had magnification of about 40x or slightly more.

So, we can now add to the story of the two great men that John Dollond made the telescope used by Mikhail Lomonosov to discover the Venus’s atmosphere!

The author would like to express his gratitude to Dr. Valery Terebizh for the Zemax evaluation of the early telescope-eyepiece combination. Discussions on the subject with Alex Rychenko and Dr. Igor Nesterenko are greatly appreciated, as well as Dr. Vladimir Shiltsev’s help in editing the manuscript