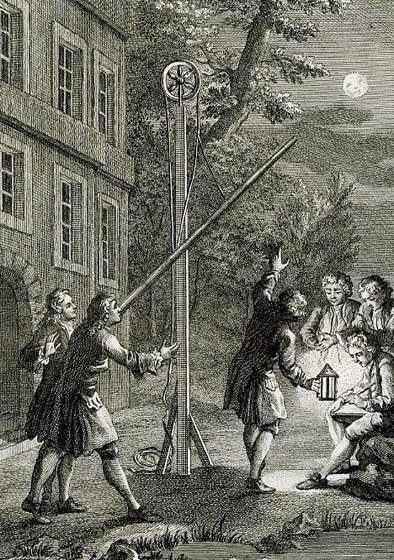 The beginning of the 17th century brought to the life a new device – a telescope – and that helped to discover many new celestial bodies.  The observable world tremendously expanded and human fantasy started to populate it with people, animals and plants. Moon and the closest planets were the first candidates to search for the extraterrestrial life. The atmosphere, was thought to be required for any life forms of the other worlds, was in mind of the observers and was “in the air” – it was “wanted” and actually discovered; the trees on the Moon (W. Herschel) and the canals on Mars (G. Schiaparelli) were observed later.

The mid-18th century was quite a different world from ours – simple life, simple food, no TV and internet gave people more time to look at the sky, which was dark, free of satellites and light pollution. Kings sponsored construction of Observatories, patron science, equipped expeditions and supported scientists. England was leading the industrial revolution, supplying the first class optical instruments to other countries. English masters were invited to work abroad while exchange apprentices (“industrial spies”) from other countries came to work at the best instrumental shops of the “foggy Albion”.

A new type of telescope, two-lens (doublet) achromatic refractor was patented by Englishman John Dollond (1758) and immediately introduced to the market. Comparing to its predecessor – a single-lens objective (singlet) telescope, which was the dominant astronomical gear from 1608 (H.Lipperhey)  to the end of the 17th century, the new telescopes were much shorter and better quality,  as the chromatic aberration was reduced by combination of crown and flint lenses. Several of those new instruments were used for observations of the first Venus transit of 18th century and many dozens during the second one.

These rare astronomical events of 1761 and 1769 gave an opportunity for measuring the size of the solar system and find the fundamental astronomical unit (AU) – the mean Earth-Sun distance. Hundreds of astronomers from many countries participated in the observations and the first results on the AU were obtained at the end of the year 1761 (J. Short).

This article is about the telescopes used to see the Venus atmosphere phenomena during the transit of 1761. Let’s go back to 1761 to check at least the observations with known size and type of instruments and among those who saw the phenomena.

M. Lomonosov, the first Russian-born Academician of the St. Petersburg Imperial Academy of Sciences, observed the transit from St. Petersburg. Telescope: 4 ½ feet two-lens refractor. Observed entire  transit and saw luminous phenomena: blurriness of the Sun’s edge at the beginning of ingress (contact 1) and end of the egress (contact 4), “hair-thin bright radiance” between Venus and Sun shortly before the second (internal) contact, arc of light around the part of Venus off the Sun’s disc at the egress (after the 3rd contact) ; correctly explained the mechanism of phenomena and came to conclusion that “the planet Venus surrounded by a considerable atmosphere equal to, if not grater one which envelops our earthly sphere”. Lomonosov also was the first to publish the report about the Venus atmosphere in Russian (June 1761) and in German (Augusrt 1761).

P.W. Wargentin, Secretary of Sweden Academy of Science, Stockholm, Sweden.                            Telescope: “an excellent” 21 feet refractor, powers ~80X. Reported: “at the exit, when part of Venus was quite emerged, it was visible faintly illuminated. But whether this was owing to an inflection of the Sun’s rays or to a reflection in atmosphere of Venus, he leaves to others to determine”.

The telescope described in most detail was Dunn’s Newtonian with the mirror made by Peter Dollond. The exit pupil was 1.4 – 0.7mm

The reflector of 5” aperture used by Ferner was possibly of the Gregorian type counting primary relatively short focal length of 28” and high power used 80X, the exit pupil of 1.6mm

Chappe and Wargentin used both similar instruments, possibly singlet refractors with the exit pupil of ~0.8mm

Lomonosov was observing with possibly one of the first Dollond achromatic refractors. Such 4.5 feet refractors had objective diameter of 1.5-2.0” and magnifying power of 30-40X. The Exit pupil ~1-1.5mm. Similar instrument was used during transit of Venus 1761 by French astronomer N. de LaCaille.

As we see there are significant variations in the type, apertures (from 2 to 6 inch), and magnifying powers (from 30X to 220X) of instruments used for the observations, but the exit pupil used by the observers was in the range of 0.8-1.5 mm – that corresponds to an average maximum resolution of the human eye. If the instruments were of high quality, then one could quite believe that the observers should be able to see the fine details such as thin shiny line around the Venus when entering or exiting the Sun’s disk. It might be a combination of good instruments, proper solar filter, good seeing condition on Earth, favorable states of the solar photosphere and Venusian atmosphere and skills of the observers that made the discovery of the atmosphere at the Venus happened at that time. The optics for telescopes made by famous named opticians that were staying behind their work should not be questioned.

Can the above observations be repeated during the 2012 transit? We may find in collections or museums same or similar instruments used for the transit of Venus 1761, we may find place with good seeing, but  seeing the phenomena still might be questionable since we cannot repeat one condition – the solar activity at that time. That might be a key factor that made the Venus atmosphere discovery happens in 1761. It is known from chronicles that 1761 was a year of high solar activity and of a maximum number of Sun spots. Counting that we all live inside of the atmosphere of the Sun, additional research should be made to support the idea of easing seeing phenomena of the Venus atmosphere in correlation with activity of our closest star.

We have very limited information about instruments used by Lomonosov and other Russian observers during the first of the transits of Venus in the 18th century, but there are documental records that St. Petersburg Imperial Academy of Sciences had ordered for the second event 7 years later in 1767: 17 achromatic two-lens refractors made by Dollond, 6 of them of 12 feet, 8 of 3 feet, 2 of 8 feet with Graham micrometers, and one of 10 feet length with two eyepieces. Another achromatic telescope had a three-lens design objective (triplet) – that was a new Dollond’s development introduced in 1763. Also ordered were two Dollond’s divided micrometers for Gregorian telescopes; two 2-feet Gregorians by J.Short and one 3-feet Gregorian telescope by the same maker (that most expensive telescope was prepared not for scientific purpose, but for VIP person, who sponsored all the preparation for the transit of Venus 1769 observations in Russia – Empress Catherine the Great).  So, as Russia was equipped with such large number of Dollond instruments for the second transit of Venus in the 18th century, one may reasonably assume that Russian observers were equipped by the instruments of the famous London maker for the first transit as well.